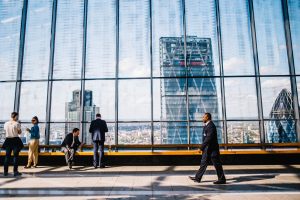 Canadian employment fell 62,600 last month, a bit weaker than expected, following seven months of recovery (see chart below). The rapid rise in COVID cases and the ensuing lockdown measures in many key regions caused the net loss in jobs in the mid-December survey. Especially hard hit were workers at restaurants and hotels who suffered a hefty 56,700 employment loss.

The jobless rate rose a tick to 8.6%–well below the peak of 13.7% in April–but still three percentage points above its pre-pandemic level.

However, there were some bright spots as several sectors churned out small gains (see second chart below). Among them were finance, insurance and real estate, as well as scientific and tech services. Manufacturing rose 15,400, and public administration reported solid gains.

On a positive note, full-time jobs actually rose 36,500, and average wages pushed back up and are now 5.6% higher than one year ago. This outsized gain, in part, reflects the loss in so many low-wage jobs.

Part-time jobs were down sharply in December, led by losses among workers aged 24 and under and those aged 55 and older. Also, the number of self-employed workers fell by 62,000, its lowest point since the pandemic began.

The December loss of jobs left employment down 571,600 (or -3.0%) from year-ago levels, the deepest annual decline since 1982–but far better than the April reading of -15% y/y. The 2020 job loss in Canada of -3.0% is also a relatively mild downturn compared to today’s US job market release for December, which reported a -6.2% y/y drop in employment. In Canada, the 332,300 y/y loss in accommodation and food services employment alone accounted for 58% of our annual job loss.

Employment was down in nine out of ten provinces last month. The lucky exception was British Columbia. None of the provinces stood out on the low side. The table below shows the unemployment rate by province. Jobless rates rise and fall with labour force participation rates. You are not considered unemployed if you are not seeking work. The number of people counted as either employed or unemployed dropped by 42,000 (-0.2%) in December, the first significant decline since April. Core-aged women and young males were largely responsible for the fall.

It certainly doesn’t appear that the lockdowns will be lifted anytime soon. We keep hitting new records in the number of Covid cases, and the more contagious Covid variant is upon us. What’s more, the rollout of the vaccine has been disturbingly slow. So until winter is behind us, there is unlikely to be a meaningful opening of the economy. All things considered, Canada’s economy has been relatively resilient. That’s not surprising given the government income support–the most generous in the G7 countries. Moreover, financial conditions are extremely accommodative.

Although no one is coming through the pandemic unscathed, most of the employment losses have been lower-paying jobs. Many higher-income earners continue to work from home. And even though the pandemic is worsening, many of Canada’s housing markets recorded their strongest December ever. Rock-bottom interest rates, high household savings and changing housing needs turned 2020 into a spectacular year for housing activity.

According to local real estate boards, December resales were surprisingly strong for what is typically a quiet month. Existing home sales surged between 32% y/y in Montreal, Ottawa and Edmonton and 65% y/y in Toronto based on early results. More distant suburbs attracted many families looking for more space with less concern about long commutes when jobs can be conducted at home. Property values continued to appreciate at accelerating rates in most markets. Downtown condo prices still bucked the trend due to ample inventories in Canada’s largest cities—the downturn in the rental market has prompted many condo investors to sell. That said, softer condo prices are now drawing more buyers in. Existing condo sales soared virtually everywhere in December.

Housing is likely to continue to cushion the blow of the pandemic on the overall economy. And while not everyone is sharing in this windfall, it will ultimately help pave the way to better employment gains in the spring.

However, no question that the bright light at the end of the very dark pandemic tunnel is a widely dispersed vaccine. PM Trudeau reasserted this week that the vaccine will be available to all who want it by September 2021. At the pace, it is now getting into people’s arms, that will not happen. Just over 0.6% of Canada’s population was vaccinated as of Thursday, January 7. By comparison, the US had vaccinated 1.8% of its population by that date, and Israel had inoculated nearly 20%, according to Our World in Data, a nonprofit research project at the University of Oxford. The U.K. had vaccinated about 1.9% of its population by Jan. 3, the latest date for which vaccination numbers were available (see the chart below).

Please Note: The source of this article is from SherryCooper.com/category/articles/